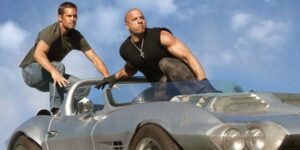 How many film franchises that struggled to merit strong critical reception to match their copious box office earnings can say that, in the eyes of the masses, they got it right the fifth time? The Fast and the Furious franchise is one of the only ones I can think of in that respect, and this is largely because where most franchises would admit they’ve run out of gas and are having difficultly finding new ground to cover, The Fast and the Furious buckled off and took a detour when it really needed it. When the previous installment, Fast & Furious, failed to excite even die-hard fans, the result for Fast Five was for writer Chris Morgan to continue to embed that grittier style he toyed with in the fourth film to the franchise’s formula. The result is a film that plays more like The Italian Job than a Fast and the Furious film, as the emphasis on cars is downgraded considerably to just one street race at the end and the emphasis on the film is a lot of masculine energy in gun fights, fistfights, and a central heist in the storyline.

All of this is well and good, and maybe this is what Fast and the Furious began asking for after the fourth film, but for me, this feels like this series went through metamorphosis and became something it was never supposed to be nor foreseen to be. The action setpieces in the film are all undeniably strong in how well they are articulated – especially one in particular which I’ll address later – and the level of energy over the course of two hours, the longest runtime a film in the series has boasted thus far, never depletes or falters. However, Fast Five abandons what made the series so likable in the beginning, and turned it into a glossy action film that feels like the highlight reel from an action film. If the first two films in this series were underground street-racing events, this film is the antiseptic showroom floor of a Ferrari dealership.

We follow the same characters we have in previous installments, specifically Brian O’Conner (Paul Walker), the cop-turned-street-racer-turned-cop-again-turned-street-racer-once-more and his friends Dom Toretto (Vin Diesel) and his sister Mia (Jordana Brewster). In the opening scene of the film, Brian winds up preventing Dom from going back to jail by causing a large pileup involving the bus Dom is being transported on. Miraculously, nobody else on the bus is hurt and only Dom escapes, with the crew fleeing to Rio de Janeiro. It doesn’t take long for U.S. Diplomatic Security Service agent Luke Hobbs (Dwayne “The Rock” Johnson) to get hot on Dom’s trail, especially when the group hatches a plan to steal $100 million from a corrupt business tycoon named Hernan Reyes (Joaquim de Almeida).

The gang decides that robbing Reyes would give them enough money to kick back for a while, or at least until the characters are called in for another sequel, er, job. In order to pull off such a high-caliber operation, they enlist in some old friends Fast and the Furious fans may recognize. Roman Pierce (Tyrese Gibson), a longtime friend of Brian’s is one of them, along with both street-racer and criminal opportunist Han (Sang Kung) and street-race organizer Tej Parker (Ludacris). All together, the gang assembles like Marvel’s Avengers and attempts an international crackdown of epic proportions.

Fast Five is the point in the franchise where the series goes to space in order to try and desperately invoke some sort of life and new concepts into their tired formula. The cockamamie qualities of Fast Five might as well have the entire cast beaming up to a different planet or a galaxy far, far away for how incredulous things become in this film. That’s not to say the earlier films weren’t, but Fast & Furious and Fast Five‘s jarring tonal shifts work to suck all the fun and juvenile sentiments out of a franchise that boasted them like oscillating rims on a fresh new import.

The film isn’t a total loss, as some scenes are particularly energetic and provide for some comic absurdity. Consider the scene I alluded to earlier, where Brian and Dom are in separate vehicles both hauling a huge, steel safe across a highway with cops on their tale. Just before they get to the highway, however, they are driving through crowded metropolitan streets, turning corners so sharply and quickly that the safe can barely do anything besides topple over, jackknife, and subsequently shatter the walls and fronts of buildings alongside the road. The repeated collisions between the wall and the safe, which is about half the size of a boxcar on a freight train, doesn’t make it come loose nor does it cause any disturbance on part of Brian and Dom as the drivers hurling the safe through the streets. Watching this mesmerizing event is like watching the laws of physics slowly implode on themselves, and it occurred to me that if people started elevating from the ground as if they were being sucked into the heavens in that same particular scene, or at any point throughout this film for that matter, the film’s own laws of logic would not be compromised.

If Fast Five was going to assume more of an outlandish route, that would’ve been the route I preferred. Not a route that has the characters operating as soulless robots through cluttered ins and outs of a convoluted heist, nor the gloominess of a film that takes itself too seriously at the same time doesn’t attempt to be realistic. The original two films offered such an inviting and homey quality to the street racers; where the characters had to avoid the cops in the nick of time or face potentially catastrophic penalties and fines. It was the kind of cheery little thing many people in the audience could presumably relate to. The franchise has now extended itself to the point where street-racing and cars have become secondary in hopes to reach a broader audience; how that isn’t viewed by the audience as the franchise selling out is a mystery to me. Fast Five is certainly fast in terms of pacing and editing, and it’s also indeed the fifth film in this franchise, but just maybe, besides the multiple “the”‘s and “and”‘s misplaced from this film’s title, this franchise is running out of gas and is afraid to really show it.