The Fast and the Furious: Tokyo Drift review (2006) 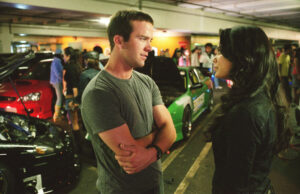 The Fast and the Furious: Tokyo Drift opens with a sequence so breakneck and fast-paced it may give you whiplash. Set in sun-soaked Arizona, it opens by focusing on local boy Sean Boswell (Lucas Black), who is being teased by a typical high school jock for his ragtag vehicle while he proudly boasts a blood-red Viper. Sean is prepared to drive away after delivering a zinger, but instead nearly takes a wrench to the jock’s vehicle after he throws a stone and breaks a window on Sean’s car. The jock’s girlfriend suggests the two settle it out in a race in a property development community where the winner, she says, will “win me” as their prize. Ho ho.

Sean and the jock agree to the bet and endure a breathless four minute long race that is so American in what it does; everything from fast cars, to stereotyped characters, to the aching masculinity are profiled in this opening scene, which does indeed circumvent to a greater moral when the race is over and the characters are badly maimed in the hospital; these street-racing incidents are illegal for a reason and often result in serious accidents.

Sean’s mother cannot afford this latest escape, which has Sean’s car totaled and his life in jeopardy now that he is about to be imprisoned on prior street-racing charges before he’s even eighteen. As a result, she sends him to live with father, who is stationed in Tokyo and a part of the U.S. Navy. Sean meets Twinkie (Bow Wow), the only black guy to be found in Japan, who introduces him to Tokyo’s underground street-racing scene which, unlike most American races, is predicated upon the vehicular art of drifting. For those unschooled, drifting a vehicle is performed on a sharp turn, which puts all the emphasize of control and handling on one particular side of the car, resulting in a tire-screeching and, if done correctly, slick method of completing a difficult turn without one losing control of the vehicle or losing too much speed in the process. I’ve done it with friends on a snow-covered parking lot; it’s as fun and as exhilarating as it sounds.

If you can’t drift in Tokyo, you’re worse than a loser – you’re an outsider, and early in his stay, Sean meets Takashi (Brian Tee), Tokyo’s well-respected Drift King, along with his girlfriend Neela (Nathalie Kelley). Sean impulsively decides to race Takashi, but because he has no conception of drifting, he loses miserably on a course made up of tight turns and many opportunities for close calls. In order to prevent embarrassment the second time around, Sean calls on street-racer Han Seoul-Oh (Sung Kang) for assistance, in order to eventually beat Takashi and avoid getting caught up in dirty underground business.

The Fast and the Furious movies have taught me a lot in just three fairly breezy installments, but I would’ve never guessed how much could be obtained and how many problems could automatically evaporate thanks to slick vehicle tricks and street races. Enemies often turn to close friends, a laundry list of felonies are expunged off records, drug lords are stopped, mass respect is earned, nationalities come together, and globalization is achieved. I may be going too far off the deep-end with the last two, but keep in mind I have four more films to tackle, so these can be seen as early predictions of impact.

The Fast and the Furious: Tokyo Drift, however, doesn’t have the charisma of its predecessors, nor does it have Rob Cohen’s hand for flashiness nor John Singleton’s assured hand at balancing chaos. Justin Lin interjects the kind of dizzying action I was hoping these films would avoid, and the characters here feel like further developed archetypes similar to how 2 Fast 2 Furious‘s loud mouth character Roman Pierce (Tyrese Gibson) thrived on smart-ass comments. For all the brooding Lucas Black does here, very little emits any character development or likability (at least Paul Walker had his coolness and his wit to back him up), and Bow Wow is laughably flat as the token black character who has to teach the outsider the ways of the streets.

Screenwriter Chris Morgan’s decision to take the franchise in a different direction is an admirable one, but also perhaps too soon for its own good. The second film didn’t focus on Vin Diesel’s Dom character, nor did it really emphasis the kind of believable, common-man quality of all the racers and street-races in the first film. The inevitability of the Fast and the Furious franchise is it succeeded the first couple times because it emphasized a wee bit of plausibility in its schemes, however, monstrous box office success for an action film will always lead to sequels trying to push boundaries and up the dosage of chaos in each successor of the franchise.

While Tokyo Drift doesn’t get too crazy, it’s still never quite as fun, especially being that the people involved in these races aren’t particularly likable, and outside of a fairly strong, if unabashedly silly, opening scene, there’s little merit to the third outing save for a special cameo by someone we’ve waited too long to see anyways.