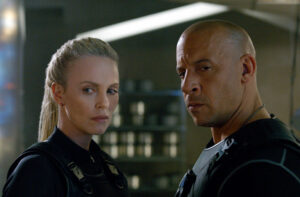 The worst thing that could happen to The Fast and the Furious franchise has already happened and that’s the fact that it’s continuing after the wonderful sendoff that was Furious 7. It was everything that begged the series to close, including a heartfelt triumph and lovely sentiment regarding family and brotherhood.

If The Fate of the Furious is anything, it’s a vote of confidence. It’s a vote of confidence for the inevitable ninth and tenth installment of a franchise that started back in 2001 that the series has a direction and a sense of loyalty to its characters, and respects audiences enough to give them installments that have real stakes and real entertainment. If The Fate of the Furious was made and treated like another franchise cash-in after the death of the film’s lead actor, then it hides it very well in a disguise of a favorable sequel.

The film revolves around the same family of gearheads that we’ve come to love; a family that is now put in jeopardy when their leader, Dominic Toretto (Vin Diesel), is coerced into working for a woman known as “Cipher” (Charlize Theron), a skilled cyberterrorist with a motive to ignite nuclear warfare. Dom’s move to operate against his crew – including his wife Letty (Michelle Rodriguez) and many friends Luke Hobbs (Dwayne Johnson), Roman (Tyrese Gibson), Tej (Ludacris), and Ramsey (Nathalie Emmanuel) – puts everything he said before about loyalty in doubt. With the help of “Mr. Nobody” (Kurt Russell), the gang works with “God’s Eye,” the all-seeing, global tracking device to get a read on Dom and Cipher’s location. Also along for the ride is Deckard Shaw (Jason Statham), the rogue assassin who worked against the group for so many years. His masterful fist-to-cuffs combat fits in well with both the street and computer-smart folks who spend all their time getting wired up again for another exhilarating ride.

The Fate of the Furious echoes the motivations of the fourth installment moreso than any film of the franchise from this decade as it turns into more of a crime procedural with more high-octane action. Consider the scene where Cipher and her team, in efforts to secure a suitcase containing nuclear codes, override the signals in self-driving cars and control them to infiltrate a police escort in order to assume control of the limousine in which two world leaders are riding. During this scene, vehicles pull abrupt U-turns out of nowhere on busy city streets and cars drive through the spotless glass of showroom windows and off the cliffs of parking garages, plummeting hundreds of feet and sending everything into an incendiary blaze.

The only thing more surprising than witnessing this is just how great all of it looks. The Fast and the Furious series has found a memorable director in F. Gary Gray (Friday, Straight Outta Compton), who knows how to handle the onslaught of action no matter where it takes place. The climactic finale of the film takes place in the tundra of Russia, where first, Roman’s bright-orange Lamborghini falls into icy water beneath a thick sheet of ice, and later on, Luke hops outside of the vehicle he’s driving to redirect a torpedo to the opposition. You’ll be lucky not to break a sweat during all of this, and if you feel your head begin to swell, that’s your brain telling you not to strain yourself when suspending disbelief.

One of the most amazing things about each installment of this franchise is how it consistently makes you forget how many people die in every new venture, including innocent bystanders. Consider Cipher’s aforementioned hacking of self-driving cars, which eventually results in a city block being completely covered in destroyed automobiles, several of them ablaze, and several already exploded. And just think how many car accidents could’ve amounted in the opening scene in Havana, Cuba, when Dom races a beater car through the narrow city streets and two motorcyclists race their bikes ahead of them to block traffic at four-way intersections.

The point is, bringing realism and a critique of vehicular physics to a Fast and the Furious film isn’t so much like bringing a knife to a gun battle but like bringing a sharpened pencil. You’re going to lose and it’ll be embarrassing.

The best thing about The Fate of the Furious is its willingness to have real stakes for the characters and to show even the most casual fan, such as myself, or critic that we care at least a little bit about the welfare of these characters, even if they often don’t deserve our sympathy. Excluding Vin Diesel’s ongoing attempt to have as little charisma as possible, when his squinted eyes and downturned brows glare at Letty as she, hurt and frightened, angrily asks him, “you gonna give up on family, Dom?,” there’s a real sense of urgency and gravity in that moment that continues during most of the encounters with Dom and his crew throughout the rest of the film.

Then there’s screenwriter Chris Morgan (who has written every Fast and Furious film since Tokyo Drift), who isn’t afraid to have some characters take bullets and make choices that will likely impact future installments from here on out.

The Fate of the Furious has issues. For one, it’s too obsessed with finding a punchline, almost never having a serious moment that isn’t interrupted by a stupid quip by Roman or some sort of patronizing comment by Tej. The women in the film, outside of Letty and Cipher, are still about as useless as a car with no wheels when it comes to characterization, and the words “family” and “values” are strung together more than they are on a given night of Fox News programming. But the film is sincere in all its lunacy and electric in the spectacles that bookend a good hour and a half of intriguing crime-drama, and while it doesn’t justify untying the bow Furious 7 secured, watching the film is a bit of a Dom Torreto hand-on-shoulder moment as if the film is looking into your eyes with half of a grin saying, “don’t worry, I got this” in a gravelly voice.