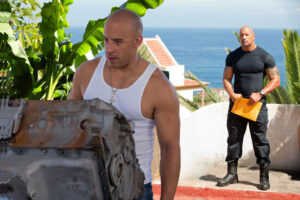 Fast & Furious 6 picks up on our trusted gang of gearhead criminals following the heist they pulled off in Rio de Janeiro that took place in Fast Five. Now, all of Dom Toretto’s (Vin Diesel) crew are fugitives, including the retired FBI agent Brian O’Conner (Paul Walker) and his wife Mia (Jordana Brewster), Dom’s sister with whom he now has a child. The family are now living in Rio de Janeiro off of the $100 million sum of cash they stole and are trying to maintain normalcy into adulthood. One day, the U.S. Diplomatic Security Service agent Luke Hobbs (Dwayne “The Rock” Johnson), who previously tried to stop Dom and his gang’s efforts to pull off the heist, has discovered potentially revolutionary information on Dom’s allegedly deceased girlfriend Letty (Michelle Rodriguez), who was seen alive and taken by a vicious British Special Forces officer named Owen Shaw (Luke Evans).

The bottom line is Shaw needs to be taken down and Hobbs knows that Dom, Brian, and Mia, despite being a family, have the skill-set and power to take down Shaw. Hobbs agrees to allow them entry into the United States once again on a citizen status rather than fugitive one, to which they accept. Reassembling their team of Roman (Tyrese Gibson), Han (Sang Kung), and Tej (Ludacris), the gang looks to take down yet another criminal mastermind no international organization in the world can touch and only a group of skilled racers can infiltrate.

Fast Five was a film that bothered me in numerous respects, but mostly because it seemed that it did nothing more than sell out the core principles of what its franchise was founded upon in order to pull in a greater audience. The sad part was, through all the physics-defying flashiness and stunt chases, even the core fanbase of the series fell for its tricks, and the film went on to be declared the best in the franchise by many critics and audiences. Having said all that, going into Fast & Furious 6 knowing that this new gritty, crime-drama style the series has been implementing since Fast & Furious, the fourth installment, was still going to be in effect, I was about as hesitant as ever.

I emerge from the film with the confidence in saying that Fast & Furious 6 is the best film in the series since 2 Fast 2 Furious, a film that for all its issues, is still a fine piece of action-comedy during a year where that genre thrived (the underrated Hollywood Homicide, for one, also came out that same year). This is a film that has it both ways: it’s a slick and stylish film predicated upon car racing and vehicular muscle and a strong crime-drama that keeps its characters in perspective through all its gritty style.

Fast & Furious 6 touches more on pathos than the previous installments; it cuts through the blatant homoerotic relation the male characters have with other male characters and the fetishization of their vehicles to reveal a deep humanity in regards to relationships. Consider when Dom finds out the high possibility his girlfriend he believed to be deceased is now still alive and, despite being incredulously so, she doesn’t remember him at all upon seeing him again. These scenes are revealing because, for once, behind all the glitz and glamour of this franchise, these characters, in addition to the audience, can step back and see the individuals behind the wheel as people (the humans crushed in the scene that takes place on a highway, involving a tank going the wrong way and demolishing every car in its path don’t get the same luxury of being humanized, but an installment in this series has yet to be perfect). The emotions don’t run saccharine-thick, but they are present, and unless you’ve let the macho physiques of Diesel and Johnson get the best of you throughout the course of this film and the last, you should at least be able to respect the film’s intentions and see what it’s doing.

Then there’s the fact that this film, unlike the last three before it, is plain fun. The characters are more unified in this film, working together and asserting their own personalities rather than just ostensibly working off of one another in a contrived manner in Fast Five. The conversational banter between characters here is also, for the first time since 2 Fast 2 Furious, strong in a way that’s witty and enjoyable, though not overdone like in the aforementioned film. Finally, the film’s slickness and gritty story doesn’t become a downbeat array of fistfights and shootouts like in Fast Five. Everything feels, even for a Hollywood action film, delicately handled and even modeled in a way that emphasized slowburn pacing with humans at the core.

Fast & Furious 6 still finds itself overwrought in terms of further distancing itself from the downhome realism in the first film to the point where its inclusion is about as minuscule as a spec of dust on one’s rearview mirror. Having said that, when it comes to The Fast and the Furious franchise rebranding itself, this is a more assured and capable spectacle that doesn’t feel like it’s pandering or selling out, but truly embracing the souls many of us have followed for over twelve years now. Director Justin Lin and screenwriter Chris Morgan, who have handled the directing and writing jobs, respectively, for every installment in the franchise since Tokyo Drift, have finally come to the point where they’re not only respecting those involved in the projects, but also the audience.