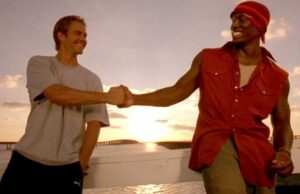 Being that there are a countless number of different vehicles, and the number of options to customize said vehicles are astronomically high and infinite, Rob Cohen’s Fast and the Furious was only destined to spawn a sequel as cornily titled as 2 Fast 2 Furious. This time, the cars are slicker, the characters are slightly different, the ante is upped, and a new director helms the camera for a mostly satisfying second spin around the block.

The film returns its focus on Brian O’Conner (Paul Walker), the undercover police officer from the first film, who has now retired from the force in Miami, earning a living by streetracing. He meets a retired racer named Tej Parker (rapper Ludacris), in addition to a car mechanic named Jimmy (Jin Auyeung), and a fellow street racer named Suki (Devon Aoki), and decides to live comfortably within his means, meaning dodging cops and entering high-profile races. While evading the police after one particular street race, Brian is apprehended by U.S. Customs Service, which informs him that in order to wipe this case, along with many others, off his record, he’d have to join an FBI mission to bring down a drug lord named Carter Verone (Cole Hauser).

After hesitantly accepting the deal, being that Dom is now on the run from the law after being set free by Brian, Brian enlists in the help of Roman Pierce (Tyrese Gibson), a childhood friend and ex-convict with a love for cars almost matching his own. The two work with an undercover Customs agent named Monica Fuentes (Eva Mendes) in order to help bring down Verone.

Unlike The Fast and the Furious, which was mostly concerned with replicating the kind of adrenaline and energy rush one experiences from street racing in a way that emphasized male bonding and the love for being alive, 2 Fast 2 Furious focuses more on the theatricalities of the racing experience. Car races and hot pursuits in this film have a glitzy aesthetic to them; a dose of what seems to be science-fiction moreso than any kind of realism, as in the first film. This is a film that’s also more concerned with trying to find the perfect one-liner for the characters rather than emphasizing the relationship between the lead characters, which, between Walker and Vin Diesel in the original film, was built on a brotherly trust.

Gibson has the energy and charisma as a performer, but writers Michael Brandt and Derek Haas don’t give him the same kind of nonchalant aura or conversational grace Diesel had, which helped elevate the first film. Walker is still here doing the best acting job he can, given the very limited role his character has outside of being a cool presence, but Gibson’s characterization is too flat and cheeky to uphold what Diesel did in the first film.

The film was directed by John Singleton, who during this time, was reemphasizing to the same American audiences who didn’t pay to see Rosewood or Baby Boy (also starring Gibson) in theaters that he is a multi-talented directing presence that deserves your consideration. Singelton’s direction, which favors a lot of in-car shots during racing but doesn’t skimp on exterior details, proves that The Fast and the Furious, while largely inspired as a concept and a franchise by the 1955 B-movie, isn’t by any means a cheap exploitation film involving four wheels and muscle. It’s a glossy, thoroughly Hollywood incarnation of the now-forgotten testament to breaking all written and unwritten rules of the road.

2 Fast 2 Furious is sweet and harmless, and once again, not an assault on the senses in terms of being a sensory overload of chaos. It rekindles the charm of the bromance between its two leads, all while showcasing some nicely choreographed race scenes (particular Paul Walker’s ‘drive and stare’ sequence, in addition to the couple of times he tries to handle his car backwards), and relies on its incorruptible energy to get by. The result may be a bit too much too soon in terms of theatrics, but most fans will likely see it as an incorporation in the series that was almost too little too late.