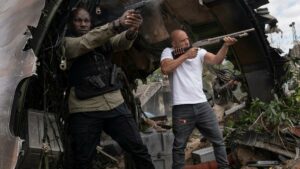 I probably would’ve opted to skip F9 had it not been for the cohost of my podcast Sleepless with Steve holding a private screening for some of his closest friends and inviting me to tag along. Not even 20 minutes in, I knew this was the appropriate way to experience this movie: with a great group of friends who were audibly engaged yet still respectful.

I was fearful such a unique experience would cloud my judgement, but there’s no mistaking the flaws of F9. Even loyal fans of the series might find something off about this brazen display of testosterone and car-chases. I revisited my review of Fast Five recently and found I wrote the following:

“Fast Five is the point in the franchise where the series goes to space in order to try and desperately invoke some sort of life and new concepts into their tired formula. The cockamamie qualities of Fast Five might as well have the entire cast beaming up to a different planet or a galaxy far, far away for how incredulous things become…”

Low and behold, the asinine, asi-ten F9 literally launches a souped-up Pontiac into the galaxy. The sheer idiocy of the whole sequence is undeniable. The saving grace is they at least had the good courtesy to send two of the most charismatic characters into the atmosphere. By that point, I was tired of multiple aspects of this sequel, including Dominic Toretto’s excessive brooding. Many opine that a series goes into space when they’ve officially run out of ideas (see Leprechaun 4 and Jason X if you need confirmation). Director Justin Lin might’ve helmed films #3-6 in the series, but even he must feel deep down inside the well is running dry on this cockamamie series.

In addition to reassembling the core — Dominic (Vin Diesel), Letty (Michelle Rodriguez), Roman (Tyrese Gibson), and Tej (Chris “Ludacris” Bridges) — F9 introduces us to Dom’s estranged brother Jakob (John Cena). Jakob is a career thief and performance driver that disappeared from Dom’s world after being blamed for the car crash that killed their father, an accomplished racer. Dom has now resorted to living off the grid with Letty and their young son until their peaceful existence is interrupted when the gang resurfaces and reveals that security mogul Mr. Nobody (Kurt Russell) has captured cyberterrorist Cipher (Charlize Theron). The plane carrying her to prison was hijacked, and crashed in the fictional Central American country of Montequinto. Jakob was behind the crash and took Cipher to a man named Otto (Thue Ersted Rasmussen), who wants to assemble two halves of a device used to control global security networks.

There’s a lot of plot in F9 and most of it is ungainly. Compounding matters is the film wants to have things both ways. It wants to be a layered espionage/action-thriller whilst evoking a meta tone that has the characters aware that they are the luckiest crop of gearheads on the face of the Earth. A real howler of a scene comes when Roman initiates a serious moment between the friends remarking how they might indeed be immortal given all the craziness they’ve survived.

Moreover, the long-running joke that the core theme of these movies boils down to “family” and nothing more is dialed up to comical levels. This makes F9 feel far more obnoxious and bloviating than the previous three installments, all of which successful in their pursuits without taking the material too seriously. This one gets high off its own gasoline fumes by comparison, amplifying its soap-opera nature to a fault. Oh, and a character who was killed makes his inexplicable return, as if we needed more retconning.

This brings me to my ultimate point. The Fast & Furious franchise has become a parody of itself. Lin was successful in reviving the series by increasing the incredulity while retaining the sanctity of the characters with Fast Five after the previous two installments appeared to stall. Creatively speaking, Furious 7 should’ve ended it all, but there was still more money to be made. At this juncture, the franchise offers the same sort of expensive thrills and impossible circumstances found in Marvel movies, albeit with less imagination. It says something about a movie when John Cena appears to be the only one trying to act, while Vin Diesel and his unfathomably crisp white tanks make him come off as a superhero more than a human being.