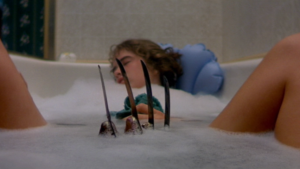 Wes Craven’s A Nightmare on Elm Street has become a quintessential genre classic; when people reference the “good ol’ days” of horror or the slasher film, they generally have both Friday the 13th and A Nightmare on Elm Street in mind. Not much can be said about the classic film that hasn’t already been said before, aside from the fact that this remains one of the most fundamental genre films of its time and its impact as a film is still widely felt today like the waves of an aftershock. It’s one of those horror films that you don’t need to put in context of the times because it’s so legitimately good and scary that it scares you anyway.

We open in the midst of Nancy Thompson’s (Heather Langenkamp) nightmare, where she is haunted by a figure wearing a red and green striped sweater, a fedora hat, and a hand made up of razors. She wakes up shell-shocked and informs her friends Tina (Amanda Wyss), Rod (Nick Corri), and Glen (Johnny Depp) about the nightmare, to which nobody but Tina seems immediately convinced, for she had a similar nightmare that same night. After a while, the gang brushes it off in favor of a sleepover at Tina’s house, which ends in tragedy as Tina is brutally murdered in her sleep upon elevating from her bed and being viciously attacked by an unseen force. Because Rod, her boyfriend, slept with her that night, he is taken into custody and Nancy and Glen are left to confront what exactly is haunting them and how to stop it.

The actual haunting comes from a demon named Freddy Krueger (Robert Englund), a savage character that seems to be extracted from the bowels of your most sinister nightmare. His methods are dastardly original, for he haunts victims in their dreams and daydreams, before murdering them in their sleep, where they’ll subsequently die in real life, as well. Wes Craven, who also wrote the film, makes Freddy so quietly ingenuous you might miss the reason why he’s such an unexpected villain. Sleeping is when we, as humans, are at our most vulnerable, taken out of our environment temporarily in favor of a night’s refreshment to “recharge our batteries,” so to speak colloquially, for the next day. With that, we cannot consciously control what and who we dream of, so Freddy shows up in our dreams in order to snatch us at our most vulnerable and make us not see another day. We can’t defend ourselves, nor can we adequately predict what will happen.

While Jason Voorhees, who predated Freddy a good four years to the point where he was already finding a new batch of impressionable youth to kill for the fourth time before his genre-counterpart decided to show up, could attack youth when their hormones and sexual energy were at its peak, Freddy attacked his victims during a time when they should’ve felt safety. With that, Craven emphasizes this realm of the dream-world by merging the likes of reality and dreams together, successfully blurring the line not only to confuse the characters in the film, but us, as well.

None of this would be possible if the cast weren’t as strong as they were, and save for some cheesiness in line delivery, most of the cast is strong here, particularly Langenkamp, who I would’ve loved to see take on varying roles aside from just horror films. The film also features the first on-screen performance by Johnny Depp, who gives one of his only human, everyman roles here in the face of grave danger.

A Nightmare on Elm Street is often buoyed by a wonderful sense of suspense on part of Craven and cinematographer Jacques Haitkin, who do a fine job at not only blurring lines of reality, but creating a film that essentially bleeds creepiness, figuratively and literally. This is a downright spooky film, giving off the vibes of a demented haunted house, where at any moment a character will slip into an unforeseeable abyss and be scarfed up by demons like a piece of meat fed to hungry, feral savages. It’s a film that manages to be occasionally gruesome without every being artistically empty or even an ugly piece of film; it’s constantly enjoyable and a strong film in terms of its narrative structure.

The only trouble, seeing past the cloud of nostalgia that often cloaks this film, is that the slowburn technique that Craven clearly tries to employ here sort of interrupts itself early in the second act, where we see a bit too much of Freddy, to the point where Nancy decides to engage in a fight with him. This feels like a case of “climax come lately,” where what could pragmatically be the conclusion to the film comes far earlier than expected and is instead used as a vehicle for the plot halfway through. Craven would’ve done better to keep Freddy a more abstract figure up until the end, focusing on his trademarks before revealing the final, hair-raising product. The scene where Freddy and Nancy face off in a dream feels like it happens far too soon and throws off Craven’s methodical buildup.

A Nightmare on Elm Street, through whatever flaw I try to accuse it of having, is still an indisputable masterpiece of the genre, destined to live on no matter how many sequels, remakes, reboots, or licensed products leach off of it. Much like The Hills Have Eyes, Craven’s earlier work, this is a film that does a wonderful job at personifying fear, although while the former film gave us a taste of personified fear in an unfamiliar location, this particular film gives us a taste of unbridled fear at our most vulnerable. Sleep tight.