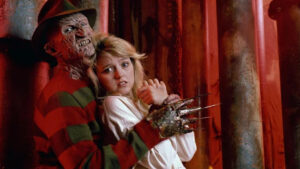 A Nightmare on Elm Street 4: The Dream Master is the point in the franchise where comedy began to eclipse the franchise’s almost unbridled devotion to horror sensibilities. It was the film that turned Freddy Krueger into a pop culture figure, capable of regurgitating every lackluster pun imaginable like an MTV VJ rather than a horror figure you’d hate to see in your nightmares. Finally, it was the film to bear the franchise’s peak budget, showing it off by including very elaborate and immaculately detailed dream sequences that toyed with the perception of reality in a manner so believable that you swore you were being haunted yourself. It’s safe to say that the series most expensive installment also turned out to be its most divisive and revolutionary.

The story picks up on characters from Dream Warriors, the previous installment, such as Kristen (Tuesday Knight), Kincaid (Ken Sagoes), and Joey (Rodney Eastman), all of whom have been released from the mental hospital that confined them for the past months and back into the public school system and their normal homes. Kristen winds up reacquainting her friend Alice (Lisa Wilcox) and her boyfriend Rick (Andras Jones), and is enjoying living her normal life until she realizes that dreaming of, or even expressing paranoia over, Freddy Krueger, the burned-faced, sweater-clad killer that haunted them before, could potentially make him return. When Freddy (Robert Englund, the only constant in this series, so it seems) winds up returning to haunt the victims in his dreams, the focus lies in Alice, as she’s the most ignorant of Freddy’s ways.

Consistency has long been a problem with this franchise and The Dream Master shows a refusal for it to accept any kind of remote pattern. Because of the constant directorial and screenwriting shakeups, and Craven’s varying and largely debatable involvement with each individual film, little in the way of tonal or narrative cohesion could be retained. The overall scope and reach of the Freddy Krueger character got hazy with the second film and found itself resorting back into the laws of the first film, with no acknowledgement of the second film other than a vague, ambiguous line of dialog from A Nightmare on Elm Street 3: Dream Warriors. The Dream Master‘s refusal to assert itself by accepting the emphasis on fear and vulnerability ideas from the first and third film or the metaphorical significance of the Freddy Krueger character is evident by the film’s emphasis on comedy from what was previously the franchise’s main source for terror.

Being that The Dream Master is the most expensive film from the Nightmare on Elm Street franchise, one can see where director Renny Harlin and his set/production designers wanted to put their emphases – the dream sequences. To the film’s credit, the dream sequences are the most elaborate and well-conceived dream sequences the franchise has yet to see, even more-so believable and immersive than in Dream Warriors. Consider the scene where Kincaid is trapped in a nightmarish junkyard that molds and crafts itself at what is ostensibly the snap of Freddy’s fingers, effectively trapping him in a sea of broken-down cars that is revealed to be a lot bigger in scope than we could’ve imagined. The scene works beautifully because it focuses on the core idea of being trapped in a dream lucid enough for you to actively move around and possess your own decision-making skills but not lucid enough where you can control the dream. The result is especially terrifying and this is one of the few dream sequences where Freddy is mostly serious.

The remainder of the dream scenes only get more decorated in appearance, and continue to live up to this first major one in size and scope. The problem is, with each sequence, Freddy gets less and less convincing. Writers Brian Helgeland (who would go on to direct Oscar-nominated screenplays for films like L.A. Confidential and Mystic River) and Scott Pierce turn Freddy into a pun/quip machine, who seems to always be in search for the next cheeky line to say rather than anything that provokes a kind of uneasiness for the audience. This desecration of a frightening character, turning him into a second rate comedian, significantly lessens his effectiveness as a character, especially when we see him command some of the most visually stunning locations he has yet to be apart of in the entire series.

Finally, though it’s a relatively minor, almost moot, point, the acting here has noticeably taken a turn for the worst. The Dream Master feels like a lackluster display of amateur-hour, Second City acting, particularly from the likes of Tuesday Knight and Andras Jones, who just do an immensely poor job at being believable screen presences. While acting in horror films is traditionally never the first thing one judges on, when it’s so wooden, as it is here, it can’t help be a jarring feature, especially when the film itself already isn’t particularly good.

A Nightmare on Elm Street 4 works in the way it decides to further construct and elaborate on the many worlds of which Freddy inhabits, in addition with taking on some seriously twisted and quirky scenes the franchise has never seen before. However, it does a miserable job of sticking to whatever guns the series had drawn at this point by sacrificing scares for cheap quips and capable actors for whomever could fill the part quickly and inexpensively. The result is a film that was evidently rushed on every level that wasn’t visual effects or production design.