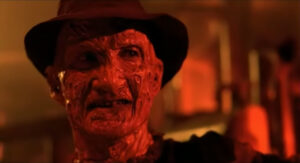 A Nightmare on Elm Street 3: Dream Warriors is a more complete and well-paced film than both of its predecessors, much more consistent in its narrative and its creation of the laws by which Freddy Krueger abides. The first Nightmare on Elm Street focused on a setting that was largely eerie and a slowburn narrative approach whilst the second film largely abandoned the logic of the previous film and had Freddy serve as a metaphor for an insecure, homosexual teen’s repressed side. The third installment in the franchise continues playing “musical directors and writers,” switching up who occupies the director’s chair and who holds the pen, for the better, this time allowing Chuck Russell to direct and a quartet of writers – among them the series’ original creator Wes Craven and The Shawshank Redemption writer/director Frank Darabont – who finally emphasize the fear and vulnerability that Freddy places on each of his victims.

Our new troubled protagonist is Kristen Parker (Patricia Arquette), who is haunted by the burnt-faced, sweater-clad figure Freddy Krueger (Robert Englund) in her dreams, much to the dismay of her mother. Following an instance of alleged self-harm, however inflicted by Freddy while Kristen was in her sleep, Kristen is taken to a mental hospital, where she meets a slew of other troubled souls her own age: Philip (Bradley Gregg), a marionette puppeteer, Kincaid (Ken Sagoes), a short-fuzed, humorous loudmouth, Jennifer (Penelope Sudrow), an aspiring actress, Taryn (Jennifer Rubin), a recovering drug addict, Joey (Rodney Eastman), who has taken a vow of silence due to the terror his nightmares have given him, and Will (Ira Heiden), who is wheelchair bound following a failed suicide attempt.

The curious thing about these teens is all of them were haunted by dreams of Freddy before ever having met each other. As a result, they are counseled by Dr. Nancy Thompson (Heather Lagenkamp), who was haunted by prolific nightmares on Freddy in the first film. The film revolves around the teens being imprisoned, not only by a mental hospital and the faculty who don’t take them seriously, everyone except for Nancy, in addition to being held captive their dreams and recurring nightmares. The rules of Freddy’s game have reverted back to the rules of the first film that were abandoned and stretched in the second installment: if you die in your dreams, you, in turn, die in real life.

A Nightmare on Elm Street 3 has a plethora of interesting characters, even more-so than the original film. These characters carry personality and their frequent group meetings, where they talk about the previous events of the day and, specifically, their nightmares, further develop them as more than just young, fresh faces soon to be victims in a horror film. Their personalities shine through brightly and the screenwriters etch enough of a balance between comedy and humanity in these characters to make their deaths actually send meaningful pangs of shock and disappointment through the audience.

This installment is also the point in the series where the dream sequences started to get much more elaborate and realized, in return, making them creepier and more effective. The specials effects give the feeling of being trapped within the endless boundaries of a frightening and unrelenting lucid dream, and Freddy remains a universally frightening presence that manipulates and slowly takes over. He doesn’t work too fast in terms of killing his victims, nor does he spout endless quips and pop culture punchlines as if he’s a standup comedian. He’s pure, unadulterated evil, and the fantastic, decorated dream settings give him all the power and make us feel just as helpless as the innocent souls on screen.

A Nightmare on Elm Street 3 is a lot of fun as a horror movie, not too self-serious or meta to be taken seriously, nor too bleak and dreary to be considered monotonous or uninteresting after an extended period of time. It reinvigorates the franchise with a commendable amount of emphasis on scares and set-decoration after a film that was too concerned with forming a metaphor and rejecting the fundamental rules of the series’ newly instated playbook. We go back to the basics with Dream Warriors in a way that sets everything up anew in a thoroughly entertaining manner.