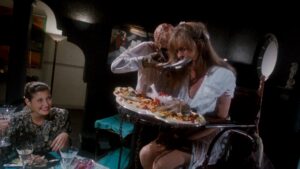 I feel a good part of the reason for the prolific inconsistencies in quality for a number of slasher franchises in the 1980’s can be attributed to two main factors: the short release window between films and the constant decision to play “musical writers and directors.” The demand by studio-heads to spit a new franchised horror film into theaters in or around the fall season was absolutely incredible during this time, and as a result, you got a saturated marketplace that got to see Freddy Krueger, Jason Voorhees, and Michael Myers, sometimes all in the same year, leading to a massive lack of interest and concern by the time the franchises decided to conclude. Then there’s the element of these films constantly swapping writers and directors at the end of every film; this particular factor is notable for the Nightmare on Elm Street franchise, which only had one particular writer/director show up to do a film more than once and that was Wes Craven on both the original and the last film Wes Craven’s New Nightmare.

The combination of these two effects lead not only to a rushed quality with each of these Nightmare sequels, which some can overcome but others cannot, and the element of narrative logic and the interworkings of the world being manipulated to fit the differing needs of the respective writers and directors. The road of the Nightmare franchise has been anything but smooth and comfortable and A Nightmare on Elm Street 5: The Dream Child is the second time the series has effectively pulled itself up from its bootstraps after a slight deviation in quality.

The film reinstates its focus on Alice (Lisa Wilcox), the lead from the previous film, The Dream Master, who is now dating Dan (Danny Hassel) from the original film. After going a long period of time without being haunted by Freddy, Alice finds herself nearly drowning when her shower’s drain becomes clogged and begins overflowing with water in the opening sequence of the film. This leads to Alice being absorbed into Freddy Krueger’s (Robert Englund) vicious and unpredictable dream world once again, with her lucid abilities still unable to save her except for in the nick of time when she transports back to reality. The dreams of Alice and Dan have taken on much more vivid, almost Gothic/Victorian representations of distorted reality, which eventually lead to Alice becoming pregnant with “the dream child,” who is known as Jacob (Whit Hertford) and seen through Alice’s visions. Worried about the safety – and sanity – of her child, Alice works, yet again, to try and stop Freddy before he takes a toll on haunting others, including her fragile son.

As stated, A Nightmare on Elm Street 5: The Dream Child takes on a brand new stylistic design that director Stephen Hopkins and cinematographer Peter Levy employ with exquisite detail and frightening buildup. The dream sequences carry a much more detailed and lucid vibe, ranking comfortably alongside Dream Warriors, the third film, for the some of the best of the series. The scene where Freddy manipulates Dan’s control and perception whilst driving a vehicle all in the matter of a few minutes winds up being a wickedly effective fright in terms of making the audience feel like the entire scene is out of their control. Also intensely effective is the scene where Alice’s friend Greta (Erika Anderson) winds up victim to Freddy’s games in a violent, brutal way at a dinner party also works to show off the elaborate dream sequence setups in addition to the amalgamation of Freddy’s ability to be both a comical and sinister force.

What I formerly saw as a dichotomous approach to Freddy – in a sense where he had to either be unadulterated evil or comical and cheeky – writer Leslie Boehm blends to give us a Freddy we haven’t seen before. That is an unpredictable force that exercises both comic and horror tendencies through his ability to spout one-liners and give you the ride of your life in more ways than one whilst trapping you in layered, scary dream sequences that showcase darker imagery than ever before.

On these notes, A Nightmare on Elm Street 5: The Dream Child works very well. It disregards the more unbridled, primary comic elements of its former film to continue to assert Freddy’s role of being an ugly, menacing character. The story at hand may show signs of the franchise panting and wheezing to an uncertain close, but the costume/set design show that this series had more inventive visual schemes that could’ve materialized and continued for much longer than the franchise itself did, even in the face of alternative directions and frequently changing writers and directors.