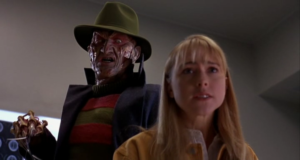 Wes Craven’s New Nightmare comes as the sixth sequel to the long-running Nightmare on Elm Street franchise but finds itself more functional and ambitious than many franchises that have made it this long do. Infused with a great deal of meta-writing to the point of intrigue, crafty ideas about the effects horror films have on those who make them, and darker, more terrifying portrayals of the film’s beloved dream-haunter, New Nightmare revives the franchise that, according to Craven, was beginning to get too off-task with its practices.

By this point, Craven had already expressed frustration over the fact that the character of Freddy Krueger had become far too comical, and the later films were written with far too much silliness, masking the true horror and fright he originally conceived for the series. Freddy had become “cartoonish” and lost his original abilities to frighten audiences as much as taunt them with silly phrases and ubiquity in pop culture. As a result, Craven created New Nightmare to give that life back to the franchise, and he did so in a way that explored a fascination with the concept of “metafilm,” or a movie that is referencing beyond the film into the real lives of the actors or to some other, unrelated film universe, as if the characters are wiser beyond their own definitive world.

This fascination with “metafilm” Craven began to toy with would only get further explored in his critically/financially-successful Scream franchise, which was brewed two years after New Nightmare. For now, however, Nightmare concerns itself with Heather Langenkamp, the actress who portrayed Nancy Thompson in the original Nightmare film, as she lives with her husband, who works in special effects, and young son in Los Angeles. Heather has gone onto receive a great deal of recognition for her as Nancy, and learns that Wes Craven is contemplating using her again for his forthcoming Nightmare project, which will further which will, of course, have Robert Englund reprising his role as Freddy Kruger.

In the mix of this, Heather begins experiencing lucid nightmares of her or her family being attacked and assaulted by Freddy and taken as “his children,” completely losing sense of reality. This is only furthered by the abundance of earthquakes Los Angeles is experiencing, as well as the constant stress she’s under with managing her child and her other projects.

Craven decorates New Nightmare much differently than the previous installments, most notably through the abundance of different costumes Freddy boasts, with one of the most stylish and menacing being a black and blue cloak. In addition, Englund is much less concerned with sloganeering and finding just the right punchline for his character Freddy than returning to the haunting and demonic presence Freddy can truly be. The idea of a figure haunting our dreams and finding ways of sneaking into our reality, distorting it, and leaving it at his mercy is a wickedly frightening idea, and Craven returns to the elements of exploring that idea rather than turning it into black comedy.

New Nightmare can be quite eerie at times, but it also has a pleasantly subtle sense of sass to it, especially when Craven comes on-screen, or when one of Heather’s costars tries to but in and help her out. This is where the Scream foundation ostensibly came into play, with Craven experimenting with self-referential humor in such a way that makes the film more interesting and not entirely consumed in its own cheeky ways. Combining these elements, especially in a way meant to evoke humor and make fans of a franchise recall moments from films past, could easily destruct in a big way, but Craven is so smooth with the incorporation of the aforementioned elements that we get the idea he had this idea festering in his mind long before he put the pen to the paper.

Because evident care and thought went into Wes Craven’s New Nightmare is likely why it plays like a unique horror film, quietly proposing ideas about those who work in the film industry, specifically making horror films, and what effect such work has on their psyche and their own personal lives. The tone is much more frightening, and given the seriousness and ambition Craven has for the material, the film feels much more sincere in ways the abundance of Nightmare sequels lacked, leaving this to be one of the most unlikely contenders for one of the strongest sequels to a horror film, especially trying something new this late in the game.