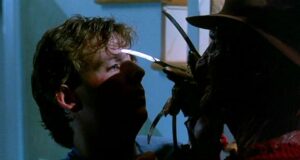 A Nightmare on Elm Street 2: Freddy’s Revenge comes as a surprise for anyone expecting the series to keep with its reality-bending, surrealist brand of horror that Wes Craven pioneered for the first film. However, little did people know at the time of its release, this is the film that would hereby kickoff a series of sequels to the classic 1984 film by playing “musical directors,” with New Line Cinema acquiring new directors and writers to to etch their own sort of spin on Craven’s classic, dream-haunter.

Out of all the Nightmare on Elm Street sequels, the first one has a chance at being the most substantial one in the regard that the subtext is more interesting than anything in the way of character relations or legitimate scares. In addition, it also may be the slowest eighty-two minute film I’ve ever watched, taking its time building up its situation in a way that doesn’t feel like the slowburn pacing Craven used for the first film as much as it feels like being just plain slow.

The story revolves around Jesse (Mark Patton), who has been waking up soaked in his own sweat for the past several weeks, worrying his family and his best friend Lisa (Kim Myers). Little does anyone, let alone Jesse, know that he is being haunted by Freddy Krueger, the same demon who terrorized Nancy and her friends in the previous film. The shakeup to the story this time around is that Freddy doesn’t exactly haunt his victims in their sleep as much as he serves as a repressed identity or sensation – or like a closeted skeleton, ambiguity intended – for Jesse. The repressed identity in question is homosexual and the gay subtext is so blatant in A Nightmare on Elm Street 2 that you could probably watch the film with the sound off and probably get it. Jesse now has the choice to confront the metaphorical and physical demon inside of him as he slowly eats away at his confidence and his mental health throughout the course of the film.

A Nightmare on Elm Street 2 gets considerable subversive points for being a film that dared to feature a significant level of homoeroticism – including a scene in an S&M bar as well as a clearly homosexual murder – in a narrative where you’d least expect. If nothing else, this is where Freddy became less a nightmarish boogeyman that just seemed to appear in one’s head out of nowhere and more a metaphorical albatross that contributed to the slow and painful deterioration of a young person over time.

Director Jack Sholder and writer David Chaskin do all they can to give this gay subtext weight, and the film largely remains interesting for that one idea. To boot, Chaskin infuses one of the best scenes of the franchise, which is the opening sequence here, taking place on your average school bus ride through a typical suburban neighborhood. The nonchalant, unassuming nature of the film that slowly descends into a dimly lit, grim suburban nightmare is the perfect visual representation for the series itself, and cinematographers Jacques Haitkin and Christopher Tufty make this scene’s escalation slow and delightfully unexpected.

Through all the unexpectedness that Sholder and Chaskin manage to create, they do, however, forget the most fundamental inclusion to the narrative that, if anything, is the most expected and that’s making this a horror film. A Nightmare on Elm Street 2 is so depressingly mild and largely devoid of scares that it makes everything else questionable as a result. There’s no validity to the suspense, nor the immersive buildup here that was in the first film, so what entails is a film that has a real identity crisis in terms of whether or not it caters to substance or caters to its genre.

A Nightmare on Elm Street 2: Freddy’s Revenge pleasantly takes the series in a different, deeper direction, but its lack of scares and sudden change of rules as to how and why Freddy haunts his victims is a bit jarring, especially when Freddy is such a non-character in his own film.