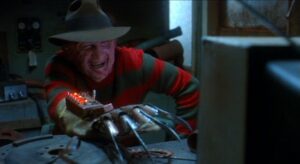 Freddy’s Dead: The Final Nightmare does little else but signify that this was the appropriate time to conclude the long-running franchise, which, at this point, had spanned a good seven years. After every mediocre attempt to reinvigorate the franchise, the series always seemed to be able to catch itself in a way that maintained some level of quality control with each passing installment. After the fifth film took the series in a more Gothic direction, while pleasantly adhering to the laws of the world of which Freddy inhabited, Freddy’s Dead can’t seem to adequately discern reality from the dream world. What entails is a hybrid of genres that dives head first into supreme campiness and forgoes much of the horror elements to continue with the trend of turning Freddy Krueger into a one-liner machine rather than an effective horror villain.

The story revolves around a character known as “John Doe” (Shon Greenblatt), the last surviving teen in Springwood, where most teens have succumbed to an ugly, nocturnal fate from Freddy. In efforts to try and stop Freddy once and for all, an older psychologist named Maggie (Lisa Zane), who is looking to treat John for amnesia and mental illness, as well as his prolific and lucid nightmares about Freddy Krueger, and her friend Tracy (Lezlie Deane) work to try and enter the realm of Freddy’s dreams in order to stop him from the source of his madness – his mind.

The concept of Freddy’s Dead loans itself to a lot of introspection for one of the most recognized killers in mainstream horror. The problem lies in the fact that, for one, we don’t care about he characters. The previous films saw our connectedness to the characters stemming from the idea that we recognized them as helpless souls victim to the violent, merciless actions of Freddy. We saw them at the mercy of their fragile states of mind, often confined to the four walls of a mental asylum in order to try and maintain some level of sanity. Freddy’s Dead robs us of that level of helplessness and fails to provide a compelling alternative, giving us characters with little backstory or detail to them and a pacing that is so slow that it fails to amount to anything.

During the nineties, horror films became far more campy than their seventies and eighties predecessors. Newer horror films, both theatrically released and made exclusively for the direct-to-video market, excessively added the campiness factor to their films. Even franchise titles released during this decade saw a turn far more into cheeky, meta territory. Freddy’s Dead is no exception. Its change becomes solidified when, during the film’s most absurd scene, Freddy controls Breckin Meyer’s slacker Spencer character as he haphazardly wanders through a traditional nineties platform video game via his claw-hand, which has somehow morphed into a Nintendo Power Glove. While doing so, Freddy recites popular Nintendo marketing slogans from the time period, in addition to adding his trademark zingers to the mix, as well.

Scenes like this cut somebody like me off fairly quickly, somebody who admired the sheer helplessness and peril the audience was victim to, much like the helpless characters, in films like Dream Warriors and The Dream Child. Freddy’s Dead goes for the cheap laugh, on top of creating a film that, once again, abandons the conventional laws of what Freddy can do and where he can go. Instead of confining him to the dream world, directress Rachel Talalay spins the story in such a way that blurs the line of what’s reality and what exists in the dream world, and not in the mindbending way you’re expecting from reading that. She does so in a muddled fashion that creates apathy to the point where once the characters are not interesting, the suspense is far too slow and unrewarding to really pay any mind to, and Freddy is more a joker than someone who can legitimately terrorize and haunt you that the film becomes more of a joke laughing at itself.

The film is most known for its 3D end sequence, which I indeed experienced with the now-vintage red/blue, cardboard 3D glasses. The good thing about this sequence is that it makes you grateful that some executive at New Line Cinema refused to greenlight a feature-length 3D Freddy film; even for the time period, this is some of the most atrocious 3D I’ve yet to see. Normally, when one takes off the cardboard glasses during a 3D movie, they see a distorted picture on the screen that becomes almost incomprehensible with the presence of wavy red/blue outlines around characters and dichotomous color hues taking prominence on screen. Even with the glasses on, this effect remains, effectively making an incoherent picture that made me feel like I was taking an eye exam instead of watching a film. It doesn’t matter, however, as the 3D isn’t even used for an added layer or sense of depth, but for a cheap gimmick, as we see fiery skulls, Freddy’s face, and various kinds of worms propelled in our face for the fourteen-minute sequence.

Freddy’s Dead: The Final Nightmare is a depressing way to conclude such a legendary, indelible franchise, which practically begged that the series needed to be rebooted in some way by its original writer and director. It’s a film that’s too campy to be scary and true to the themes and approach of its predecessor, and too gimmicky to be of any particular substance. Without Wes Craven’s New Nightmare, a seriously underrated and commendable attempt at meta and psychological horror with Craven using his trademark Freddy character to bend reality and fiction in a far more believable and organized way, we could’ve ended this franchise on a film that is little more than a curious, early-nineties oddity that should be delegated to the back pages of a cult/forgotten cinema catalog.