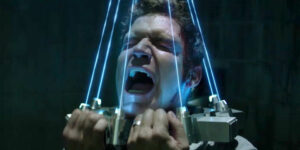 There’s something disheartening about a franchise lying dormant for so many years only to reemerge with a theatrical installment that feels like a direct-to-DVD movie – and we’re not talking about Jeepers Creepers 3 again. Jigsaw follows hot on the heels of that belated sequel, unfortunately bringing much less exciting events to the table that are much less interesting to discuss.

Jigsaw is a wooden, substandard installment in the once captivating franchise that emerged during the Bush administration’s controversial emphasis on “enhanced interrogation” practices during the Iraq War. The now-thirteen-year-old Saw created many fans sick enough to seek out the films en masse enough to prompt six annual sequels as well as the subgenre now informally known as “torture porn,” where numerous characters in a film are tortured or mutilated as audience’s appetite for blood grows by the second. It’s a mystery to ponder why Lionsgate decided to resurrect what was thought to be the concluded franchise for another installment that gives one the impression the writers and crew behind it were so excited to get the series moving once again they would operate as quickly as possible in order to realize that dream.

The film presents us with a predictable amalgamation of several individuals subjected to the vindictive ways of the Jigsaw killer in a booby-trapped warehouse and a police procedural that involves numerous individuals trying to track down Jigsaw and those kidnapped. The film opens with a criminal named Edgar Munsen (Josiah Black), who evades police custody long enough to get to the top of a parking garage to obtain a trigger mechanism. He’s cornered and subsequently shot by police, with his frantic ramblings about five kidnapped individuals standing as his last statement before he is transported to the hospital in a coma.

Cut to a large warehouse where five people are held captive with metal buckets over their heads, the buckets tied to chains that run through a wall with various circular blade-saws, and we have ourselves a film. Several individuals (Laura Vandervoort, Mandela Van Peebles, and Paul Braunstein to name the most notable) are now subjected to Jigsaw’s “game” that involves confessing to sins of the past in addition to surviving a brutal series of potentially lethal traps. Sometimes surviving for the collective means subjecting one person to torture or even death, but even that comes full-circle as serving as that person’s repercussions for something unforgivable they’ve done in the past.

Such an event perplexes police due to the fact that Jigsaw, also known as John Kramer (Tobin Bell) died, leading Detective Halloran (Callum Keith Rennie) on a familiar goose-chase, with forensic pathologists Logan Nelson (Matt Passmore) and Eleanor Bonneville (Hannah Emily Anderson) along for the ride. Meanwhile, the trapped individuals confront their past crimes through bloodshed and self-sacrifice, kept in line by Jigsaw’s strict emphasis on following the rules and avoiding the temptation of taking shortcuts, which will always result in more excruciating punishment.

Jigsaw‘s mediocrity comes in how ordinary it feels. For a once-inventive franchise that found ways to surprise with each new installment, Jigsaw provides its titular character with a weak “comeback,” if you will, by giving us most of what we expect to be given in a very sub-par manner. The characters held prisoner by Kramer are one-dimensional, their dialog largely comprised of screaming while their backstory told in flashback, and those making a cogent effort to apprehend Kramer prove to be just as faceless. Even Jigsaw’s voice doesn’t terrorize like it used to, which makes a bulk of the film rest on the strengths of its traps, some marginally memorable, but most incredulous and disposable.

One thing I’ve appreciated about the Saw franchise was its ironic commitment to pessimism. One of Kramer’s ulterior motives is getting those he holds captive to appreciate life after taking advantage of it for so long, but so often do the films show the characters’ (realistic) failings, which of course means their murders. The conflicted, arguably disturbed desires of the audience come into play by the eternal conflict many Saw fans face: they want the character to live, but they also want to see the trap succeed and reveal its interworkings. With Jigsaw, the traps feel rudimentary, and maybe that’s because after seven films, so many of us have become so in-tuned with the mind of Kramer and his motivations that we now simply predict what we once couldn’t imagine.

But the coffin-sealing nail for the film is its pacing and the convolution it brings. Yet again reiterating that this film looks and operates like a belated direct-to-DVD sequel, it also moves like it was forced to be barely 80 minutes from the beginning. That means the final act of the film resorts to characters practically panting and hyperventilating in order to get their motivations heard so the credits can roll as soon as possible. These revelations are rattled off so quickly that you might find yourself watching the end credits longer than you normally would in order to piece together the details of the conclusion; not because it’s elaborate but because it’s so poorly explained.

Jigsaw might give the most-starved Saw fan something to cheer on, but the real fans of the franchise deserve something far more compelling than this monotone rehash. Part of the problem is somewhat inevitable and that’s the idea that many horror fans have seen so much grisly carnage on film over the last decade that their stomachs aren’t as queasy as they once were. With this in mind, the directing team of Peter and Michael Spierig (Daybreakers, Predestination) as well as the writing team of Josh Stolberg and Peter Goldfinger needed to come with an approach that was cognizant of the altered minds of the zeitgeist. When you remove the allure of Jigsaw’s weightless traps from the film, you’re left with a sterile procedural with a twist rendered ineffective and that’s no fun in a franchise that was once all about it.