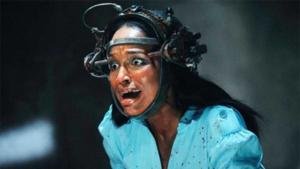 It might’ve taken three films for this series to fully regain its footing following the death of its antagonist, but Saw VI emerges successful after two less-than-stellar installments. Mere days after seeing Saw IV and Saw V, I find them bleeding together with their ability to retcon themselves in a manner that would not be seen again in a mainstream series until the new Star Wars trilogy. Saw VI not only has value in context of the larger Saw-verse but social commentary that gives it something of a purpose. It’s a scathing critique of the healthcare system in America, calling it like it sees it in the wake of a massive recession.

Sure, it’s not perfect, but it’s something unique and distinguishable — two traits that ordinarily get lost by the time horror franchises find themselves at the fourth or fifth sequel.

At long last, it appears that screenwriters Patrick Melton and Marcus Dunstan (who have written every installment since Saw IV) are finally able to implement their own ideas for the series. That required substantial groundwork in the fourth film, a rather boring watch, and establishing a direction with the fifth film, an improvement that still found itself coming up short. With Saw VI, we are reminded that before he had his throat slashed by Jeff Denlon in Saw III, John Kramer (Tobin Bell) was battling brain cancer. It turns out what led to his suffering was his lackadaisical insurance company not wanting to foot the bill for an experimental treatment. John, personally, had nothing to lose trying it, but he was denied by William (Peter Outerbridge), a smarmy executive who had devised a formula that allegedly helped him quantify whether or not a patient is worth the money to save.

Naturally, William becomes one of Jigsaw’s posthumous pawns as he’s put through an elaborate series of tests that will show him how difficult it is to determine a human life worth saving when it’s right in front of your face and not hamfisted into some cockamamie equation. Meanwhile, Mark Hoffman (Costas Mandylor) does all he can to frame the now-deceased Agent Strahm for the most recent Jigsaw-esque murders, but the surviving task force, including Agent Perez (Athena Karkanis), fully recovered from her wounds, is onto his elusive ways. Also involved is John’s late wife Jill Tuck (Betsy Russell), the primary executive behind a drug rehabilitation clinic, which we see earned the scorn of John in a pivotal flashback that features one of Bell’s finest moments since the series began.

Kudos to first-time director Kevin Greutert and cinematographer David A. Armstrong for restoring something of a color palette to this series. The previous two films boasted cold, clinical grays and whites that drowned out any and all visual personality of the predecessors. Saw VI plays more like a funhouse of horrors, with deep reds and multiple intuitive sets. While some traps feel more like stunts — such as one multi-level maze that involves ladders, smoke, and fire — they feel more realized in their creativity, with a lesson embedded in each. One extended sequence involves a carousel that takes turns stopping on one of six individuals before a shotgun aimed at point blank range lowers, aiming directly for their heart. It’s up to William to decide who lives and who perishes; of course not without some self-inflicted pain of his own.

We, too, are treated to more gore, less cutaways, and pleasantly frenetic editing — all features we’ve come to expect of this series yet elements that were MIA in both Saw IV and Saw V. A return to form this is and you absolutely love to see it.

Greutert, Melton, and Dunstan give us some inkling that these events live in the real world as they take aim at some of the slimiest American institutions, such as healthcare and predatory mortgage lenders. John Kramer’s monologue about the United States’ “ass-backward” healthcare system resonates and does so with the gravitas you expect from a veteran actor who, at long last, has found a role he’s made his own over time.

It feels like Saw VI restored the ingenuity that had been lacking since Saw III, what I previously upheld as the strongest of the franchise thus far. By intently focusing on two distinct storylines, it negates the narrative overload of the previous two while inviting social commentary into the mix. Sure, it could’ve happened sooner, but the journey is part of the fun, and Melton and Dunstan show that after a lot of retooling, Saw still has a leg on which to stand.