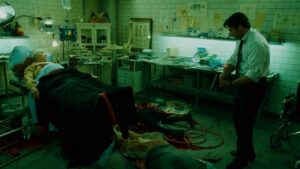 The first mistake Saw IV makes is trying to continue a flawed but effective trilogy. The second mistake is the total absence of Leigh Whannell; he apparently didn’t have any input on the script. Whether that was a conflict of interest or a personal choice, who can clarify? But his lack of involvement is felt early on as the fourth installment in this grisly franchise lumbers through a barrage of narratives after Saw III so deftly juggled two distinct storylines.

The immediate disadvantage for Saw IV, narratively speaking, is nearly all the main characters have been killed off, including Jigsaw himself, leaving a second unit of mostly faceless nobodies — at least at this juncture — to further the series. This is Saw in rebuild and the path forward is bleak with this foundation.

The film opens with an autopsy of John “Jigsaw” Kramer (Tobin Bell), who was killed in the previous film. Slashers have conditioned many of us to be nebulous to the death of the central villain, but Kramer remains lifeless throughout the bloody nip and tuck process. Make no mistake, John’s presence is felt throughout. On top of many things, Saw IV is part-prequel, which shows John’s once-happy marriage to Jill Tuck (Betsy Russell) halted by tragedy before ending in pure insanity.

Enter two surviving cops from the previous installments: Hoffman (Costas Mandylor) and Rigg (Lyriq Bent), who work with Agent Strahm (Scott Patterson) and Agent Perez (Athena Karkanis) to confirm their suspicions both Kramer and his apprentice Amanda are dead. The unnerving thought in their minds is that John, knowing his cancer was inoperable, tasked another person to carry on his sinister deeds. Before long, Hoffman is kidnapped and learns that Eric Matthews (Donnie Wahlberg) is still alive, albeit barely, as the two are bound together in a precarious trap. Rigg on the other hand, gets the Jeff Denlon Experience insofar that he gets a multi-part test. Rigg, who is constantly trying to play savior for the public and his fellow officers, is tantalized by the possibility of saving Eric’s life.

With Darren Lynn Bousman (who has directed each installment since Saw II) back in the director’s chair, the style of Saw IV doesn’t deviate much from its predecessors. There’s still the epileptic editing that overtakes the film’s coherency whenever the time on a particular trap begins to tick down along with the super washed-out color palette which verges on monochrome in more clinical settings (morgues, rehab clinics, etc). Flashbacks complicate the timeline worse than any Saw movie yet. We have Rigg’s storyline, Jigsaw’s origins, Hoffman and Strahm’s interrogation of Jill, Eric Matthews’ ongoing plight, and anecdotes about John’s former business partner Art Blank (Justin Louis, who looks like he walked off the set of a police procedural or a mob flick as a background guy).

Therefore, Saw IV falls into the rough spot of housing a plethora of new faces and too many plotlines into a 90 minute runtime. Without Whannell’s creative input on the script, the traps feel less inventive, save for one involving a serial rapist getting his gruesome comeuppance. The justification for them too feels flimsier. Some of the most fun I’ve had with the Saw films is the prologue to the traps offered by John via tape-recorder. They are ominously poetic and suggest deep thought behind each trap, either symbolic or designed to permanently scar the victim akin to their past sins. John’s presence, outside of flashbacks, is a huge loss, especially seeing as his involvement in this installment is so haphazardly handled.