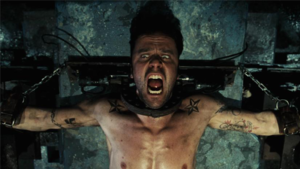 If you’ve stuck around with Saw long enough to make it to number five, you fall into one or more categories: you’re either a devoted completionist, you ostensibly love the sight of people being maimed, or you’re genuinely captivated by the interconnected storylines and eagerly anticipate how they play out. By Saw III, I can honestly say I became entrenched in the mythology of John Kramer, the many detectives who succumbed to a grisly fate trying to find him, and the idea of redemption by torture. We all have to find ways to occupy ourselves during these unprecedented times.

Saw IV had the uphill battle of trying to continue a series that I believe was never meant to have a follow-up, which explained the absence of series creators James Wan and Leigh Whannell. Wan went on to direct Dead Silence and the Kevin Bacon vehicle Death Sentence with the assistance of Whannell; the two went on to hit another career high with Insidious in 2010. Saw IV was in rebuild, as I dubbed it, as it tried but failed to be too many things at once, including an origins story for Kramer — what it should’ve ultimately been, if anything, in the first place.

Saw V is more complete than its predecessor, and for those even mildly interested in the mythology of the series, it does a fine job at juggling three storylines and giving us further insight into Detective Mark Hoffman (Costas Mandylor), Kramer’s successor as revealed in Saw IV. While piecemealing together the how/why of Hoffman becoming one of Kramer’s recruits, writers Patrick Melton and Marcus Dunstan (who went on to director the underrated horror film The Collector a year later) detail Agent Strahm’s (Scott Patterson) dive into his partner’s involvement with each and every Kramer-related case. And, of course, we have a new crop of fresh meat put through an elaborate warehouse of horrors. Five folks — all connected through a larger wrongdoing — awake to find themselves put through torture for an attempt at salvation; if they can only work together in doing so.

Despite the heavy reliance on flashbacks to the previous films growing tiresome at this juncture, it’s noble of Melton and Dunstan to find some way to keep Tobin Bell involved. Bell’s absence would be a gaping loss for this series, as his soft-spoken, philosophical monologues have done their part in giving each film of the series some modicum of substance. This is part of the reason why I’ve avoided using the term “torture porn” as a criticism because I don’t believe that’s ultimately what it is (although I don’t bristle at the accusation). While three adjoining narratives are a tough ask for any film, Saw V does a better job at making them both coherent and involving especially when compared to the fourth film.

The first three Saw films could reasonably be seen as one long film, for they are so interlinked narratively and thematically. The first two detail Kramer’s master-plan and show how he leaves no stone unturned in terms of forging a desired outcome. The third film develops what is started in the second by portraying Amanda as a worthy but easily deceived apprentice to Kramer. Saw IV had to find a way to build a foundation on which for future films to stand. Naturally, Saw V is more devoted to exposition than gore insofar that it had to explain how this now decimated police department, led by Hoffman, became that way at the hands of the now revered lieutenant detective who is made to look like a hero in all of this.

By this point, your mileage might vary. I, for one, am far more invested in Saw than I ever imagined, though I do recognize it’s a franchise predicated on muchness. Detective-work and procedural setups occasionally make Saw V feel like a CBS series gone mad, but Bell’s reticent performance and the ingenuous ways different writers and directors (this time, David Hackl in his directorial debut) make it all come together has proven to be enough ground on which future installments can stand. The clarity offered in Saw V is marginally satisfying, if you’ve cared to stick around this long. No one can blame you if you haven’t.