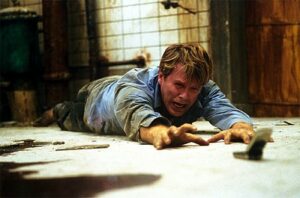 It is understandable that when people think about the Saw franchise now, images of snuff and torture cloud their minds. Speaking from someone who has seen the first, second, and final film of the franchise, I can definitely see where the series began and how differently it ended. To me, it was a film that could’ve stood perfectly on its own. It never needed a sequel, let alone six, leaching off of its coattails.

After the astonishing success of the first film, grossing over one hundred million at the box office, it almost became a yearly tradition to release a Saw sequel around Halloween. Hollywood had successfully turned Saw, a suspenseful and intriguing psychological thriller, into a shameless, inept cash-in for the season of fright.

At least we have the first film to remind us that this series was once destined for greatness. The film begins with Adam (Whannell), a voyeuristic photographer and Dr. Lawrence Gordon (Elwes), an oncologist, awaking in a dilapidated basement to find that they are chained at the ankle to opposite ends of the room, with a bloody corpse in the middle of them. They find that they each have tape-recordings that, when played, reveal the ominous voice of our antagonist. Call him the “Jigsaw Killer.” He informs them that they have, in some way, taken life for granted and that Dr. Gordon must kill Adam in six hours to be set free.

Meanwhile, the film is intercut with scenes of detectives trying to piece together the explicit tracks left by this notorious killer. He is constantly kidnapping people who take life for granted and have it all, but choose to dispose of it in a careless, unorthodox manner. A drug addict woman and a man who enjoys inflicting self-harm on himself are among his victims. Detectives David Tapp (Glover) and Steven Sing (Leung) continue to breathlessly map out his killings and try to figure out where his notorious tapes are being shot. The Jigsaw Killer, himself, is obviously a real person, but is voiced through a creepy puppet with stringy black hair, swirly red cheeks, and always riding on a tricycle.

The film knows how to create atmosphere effectively. Many scenes are unsettling, but I found the most fun to come out of the scenes between Adam and Dr. Gordon. Saw compliments my rule of claustrophobic filmmaking perfectly which is, when you limit characters geographically you must make up for it with dialog and subtleties to properly convey tone and development. Both Elwes and Whannell do great justice to their roles and play them convincingly, and the flashback scenes never seem to derail the film or make it stumble without direction.

I feel some have written off the film as being “too gory,” when in reality, Saw doesn’t have as much as gore as I remember. It’s more of a clever, tricky, psychological thriller perfectly complimented style and dialog. The last five minutes of the film are fabulous, and don’t become winded and lazy. It actually becomes quite mysterious, brutal, and above all, intriguing, with the intro to the credits being actually somewhat depressing. This is a well-written horror film, reminding us that PG-13 can’t do justice to the genre physically or mentally.