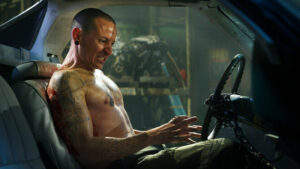 Coming hot off the heels of the best installment and promising to be “the final chapter” of the then six-year-old franchise, Saw: The Final Chapter (better known as Saw 3D during its theatrical run) ends the series with a whimper and a shrug.

The problems allegedly started in production when it was reported that Kevin Greutert (director of Saw VI) was essentially forced to direct the film due to a contractual clause with Lionsgate, effectively handicapping him from directing Paranormal Activity 2 at the time, his desired project. Upon arriving on set, Greutert attempted to make changes to Patrick Melton and Marcus Dunstan’s screenplay, much to their dismay as filming was set to commence. This impression holds water given there are a couple traps that are totally divorced from the narratives at hand and exist solely to add to the film’s body count. The opening trap takes place in a windowfront before a bustling city crosswalk after all, while another features a slew of skinheads bound in a junkyard and commences before we can get a good look at all the potential consequences that await the them if their ringleader fails his task. All this makes Saw: The Final Chapter feel unsteady and half-baked.

While detectives begin to close in on Hoffman (Costas Mandylor) as evidence mounts towards his involvement with carrying on the legacy of the late John Kramer, fraudulent self-help guru Bobby Dagen (Sean Patrick Flanery) is the latest subject put through a multi-part Jigsaw game. Bobby has made a career off of claiming he’s a survivor of one of Kramer’s games, when in reality, he never experienced the horrors first-hand. He authored a book about his “experiences,” runs support groups, and amassed wealth off of his ruse, making him the perfect candidate to get his comeuppance. Bobby has the moral compass of a televangelist in one of the film’s best scenes, which shows him preaching to a group of Jigsaw survivors — most of whom recognizable faces from previous sequels — about forgiveness and overcoming the physical and emotional setbacks they presently endure. This makes things all the more surreal for him once he finally finds himself trapped in a game that puts not only him in harm’s way, but his many cohorts including his lawyers, publicists, and wife (Gina Holden).

Meanwhile, internal affairs detective Matt Gibson (Chad Donella) is summoned by Jill Tuck (Betsy Russell), Kramer’s wife, when she promises to reveal evidence to incriminate Hoffman for his crimes. Gibson and his narrative aren’t adequately fleshed out in the time the film allows. His investigative work feels like an afterthought, especially when compared to that of Strahm’s pursuit of Hoffman in Saw IV, which, flaws and all, loaned itself to some compelling revelations. Gibson’s detachment from the series until this point is greatly felt, and we don’t spend nearly enough time with him to see him as anything more than a background detective shuffling in the foreground of the story for the first time.

Saw: The Final Chapter finds more ways to involve Tobin Bell in the series, reminding us once again that he was killed off too soon. Furthermore, it’s worth noting that even Melton and Dunstan wanted to make the concluding chapter two parts, but were forced to scale back their vision due to Saw VI underperforming (figures, given it’s great). You get this impression that the film was cut down greatly in post-production. While loose ends do mange to be tied up, things happen in so swiftly that you’re almost forced to read some sort of synopsis after the credits role in order to get an idea of what happened, which isn’t as fun as if the film were simply more calculated. The seismic revelation in the climax zooms past despite being a circumventing moment for the series — which, to their credit, Melton and Dunstan pull off well if you don’t think too hard about continuity and plausibility.

The Saw franchise is a gruesome roller-coaster, but one with more highs than lows when all’s said and done. No installment is downright awful, each merit some inventive traps or a handful of compelling revelations. With an anchor as great as Bell, it’s no bother being treated to philosophical monologues regarding his modus operandi. Saw: The Final Chapter isn’t a terribly good finale, but few horror franchises wrap up pretty when they’re seven sequels deep.