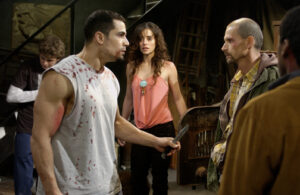 Perhaps less surprising that the massive success of Saw resulted in a sequel being released barely a year later is the fact that the subsequent installment doubles down on the gore. While a great deal of the brutality in the original film happened off-screen, a psychological angle permeated the story and elevated it above, say, a feeble work of torture porn. Saw II is a more direct sequel in the sense that it gives viewers what they expect, and on the surface, there’s nothing wrong with that. Yet the abundance of telling as opposed to showing coupled with the heavy emphasis on gore downplays what made the original so successful.

This time around, the story follows Eric Matthews (Donnie Wahlberg), a detective whose team successfully apprehends the elusive serial killer John Kramer, better known as “Jigsaw” (Tobin Bell). They find him in his warehouse of booby-traps and blood-splattered rooms, however not before Jigsaw has kidnapped Eric’s song Daniel (Erik Knudsen) along with seven others, including Amanda (Shawnee Smith) from the previous film. Jigsaw informs Eric that his son and the others are trapped in an abandoned house with a limited amount of time to escape before a deadly nerve gas emitting through the vents will kill them. Eric and his team are mostly helpless as they watch the monitors in horror, but the situation allows for him to have a one-on-one with the infamous serial killer, who reveals the thought-process behind his horrifying traps.

Saw II satisfies in giving us some insight into John Kramer. Writers James Wan and Leigh Whannell were not shy in revealing tidbits about Kramer in the original film rather than keep him in the figurative and literal shadows. Writer/director Darren Lynn Bousman (working with Whannell) makes this sequel as much about the man behind the traps as it does the traps themselves. I could listen to Tobin Bell expound about the survival instinct in human beings and people’s lack of gratefulness for being alive for hours; he’s given ample screentime to show the commanding veteran presence he is. Although much of his scenes involve him laboriously explaining his ways whilst hooked up to an IV and oxygen tank, it nonetheless establishes some credibility for a franchise that could just as easily get too consumed by blunt force, hopscotching from one ominous lair to the next.

The issue with Saw II lies in its many subjects. There’s far too many characters for Bousman and Whannell to adequately develop whereas last time around we had a tight focus around Adam and Lawrence. No one outside of Daniel and Amanda is given a measurable amount of screentime to transcend a faceless personality whose purpose is to suffer and then succumb due to their mistakes in playing Jigsaw’s game. The traps are still nifty and the score and editing work together to replicate a feeling of panic as time runs thin, but this follow-up feels more like a primitive distillation of the concept outside of Kramer’s larger presence.