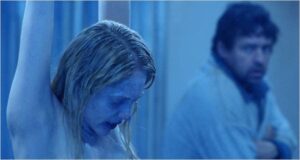 Saw III is the most miserable telenovela you’ll ever see. Its juxtaposing storylines involve a troubling trifecta of a madman lying on his literal death-bed being kept alive by a captive doctor and his apprentice while a grieving father is given the ultimate test of forgiveness. With Leigh Whannell back as the film’s sole screenwriter, it’s surprising (given his style) he negates any attempt at humor, opting instead for two hours of melancholy. Following a sequel that doubled down on the gore and negated the psychological aspects of the series, Saw III finds a way for both to coexist in an utterly nasty piece of work.

This time around, it’s Dr. Lynn Denlon (Bahar Soomekh) who becomes a central pawn in John “Jigsaw” Kramer’s (Tobin Bell) game. She’s kidnapped and taken in by John’s apprentice Amanda (Shawnee Smith), who traps her in the hospital room of his warehouse and straps an unwieldy collar to her neck. The collar is linked to John’s heart rate as he lies near death, dangerously close to succumbing to his cancer. Lynn’s task is to use the surrounding tools and medicines to perform a dangerous operation on John’s frontal lobe. If she fails, John dies and so does she. Once she overcomes the initial shock of her situation, Lynn’s fledgling banter with John becomes a source of contempt for the emotional Amanda.

Meanwhile, there’s Jeff (Angus Macfadyen), who is arguably put through a more grueling test. Jeff lost his young son to a drunk driver, a tragic event that has soiled his relationship with his wife and surviving daughter. Jeff must navigate John’s lair, coming face-to-face with everyone who played some role in the accident as they’re bound and tortured in inexplicable ways. Jeff can either choose to save their lives or watch them perish with the promise of finally getting to look his son’s killer in the eyes.

Where Saw II loaded up on characters and placed them in a Rube Goldberg house of horror, Saw III dials back and gives us two elaborate setups on which to focus. Whannell might be a little flashback heavy in certain spots, inadvertently jumbling what is an otherwise digestible narrative, but this juxtaposition is equal parts entertaining and riveting. It delivers what we expect (ample gore, sadistic traps) but what we ultimately stay for — the interpersonal exchanges coupled with the rising stakes for the characters.

Tobin Bell is given less time to wax poetic about his motivations and more time to coerce — with his ominously raspy, hoarse voice — Amanda and Lynn into keeping him alive. Furthermore, Macfadyen makes a human out of Jeff, easily the most intriguing anti-hero of the series since Adam and Lawrence. It’s hard to believe a father who lost his son to a drunk driver wouldn’t feel at least a measurable amount of hate and a desire for vengeance, but we see early on how it consumes Jeff’s will to live. With each passing trap — everything involving a subject freezing to death to being drowned in pig slop — that no matter how severe or ungodly the punishment for those Jeff blames, it will not bring him closure nor his son back to life.

Saw III also features the best climax of the series yet with one of the most sinister and horrifying scenes in a horror film I’ve seen in a blue moon. It’s called “The Rack,” which has a subject’s limbs and neck tightly secured in what is essentially an oscillating crucifix that will completely turn one’s arms and legs 360 degrees. Coupled with the grungy aesthetic, banging metal music, blood-curdling screams, and graphic bone-cracking, it’s stomach-turning, yet delightfully on-brand.

Saw III is a strong return-to-form for a series that would go on to be more than a trilogy, with four more installments coming each subsequent year serving as a reminder not only that Halloween is near but you can’t milk a good idea enough. I slightly shudder at what direction this series takes from here, but rest easy knowing the first three films, flaws and all, make a devilishly entertaining trilogy.